from Out To Sea by Chris Orrick 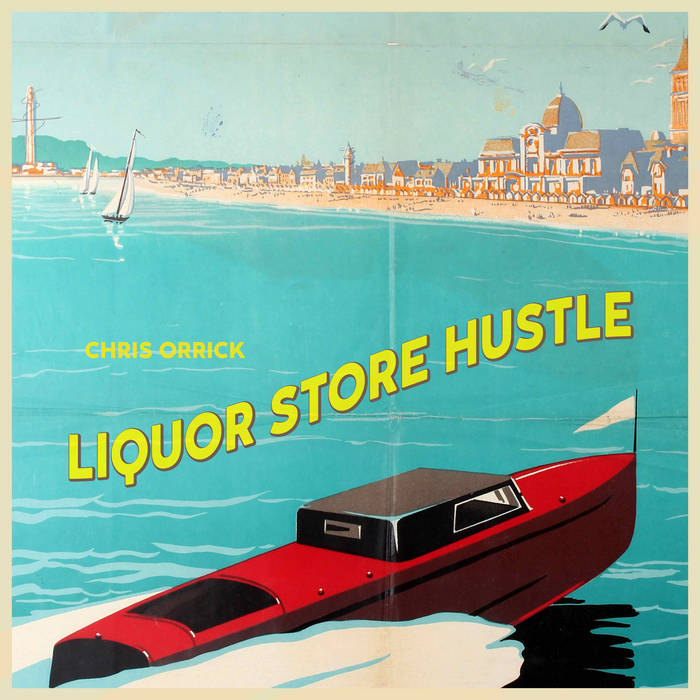 When a writer sits to open themselves up to the world, they are alone in front of a void on the page. They try to channel through themselves the most intimate moments of their lives and the world around them while delving into the question of what it all means. Is it any wonder that many find themselves holding a fifth in the process? The two acts become intertwined and  often become confused as to which came first. From Edgar Allen Poe to F. Scott Fitzgerald. Tennessee Williams to Truman Capote, their humor is often marked by its dark edge, all the more biting because of its unflinching look to the truth. Charles Bukowski and Raymond Carver were two best known for taking the quotidian and presenting it so accurately and so simply that it was profound.  Enter Chris Orrick.

The Liquor Store Hustle is hard to take too serious with its kazoo and slide whistle tones, but like a motor city Balzac, Orrick describes the contemporary Detroit work-a-day, drink-all-night, order pizza, and watch tv lifestyle. It’s an ode, a lyric poem, an anthem to the short distance drunk drive for more booze that should never be taken. It’s internal dialogues, microwave pizza rolls, pawn stars, and private competitions against the five oh. Produced by Man@Work, Chris Orrick’s newest single doesn’t take defining a 30-year-old success too seriously but maybe it hits the nail on the head a little closer than you might imagine. Run the rum, rum the booze- this is the Liquor Store Hustle.

Ten o'clock on the dot running out of booze
Only got a couple shots plus I need some food
Grab my wallet, grab my keys then put on my shoes
Hit the door, liquor store, yes I got the blues
I don't know if I'm okay enough to drive
And if I gotta ask that I probably shouldn't drive
Here we go, gas pedal, only got a couple blocks
Liquid confidence, motherfuck the cops

Parking lot, park the car, yeah I made it this far
Struggling, stumble in, this shouldn't be this hard
Fluorescent, four seconds in, this is a mistake
Imaginary line on the floor for me to fixate
Headed straight for the snack aisle
They don't notice, nothing weird just another fat guy
Grab some food, grab some booze, pay the man and leave
Victory is mine and the mission is complete

Do that liquor store hustle
Back home, driveway, breathing out relief
Cops - 0 Chris - 1, relish their defeat
Inside pour a drink, microwave the pizza rolls
Yes I am a man child, love me or leave me alone
Preferably the latter
Getting older, getting sadder, getting fatter
Television Pawn Stars, I don't even like this show
Two hours late and I'm on the seventh episode

Now it's twelve o'clock, still hungry, drunker than a skunk
Pizza place, call them up, they don't close till one
You remember large with banana pepper rings
Pepperoni, ranch dressing and a side of wings
Yeah, look what this world did to us
Hour later, on the couch, passed out still sitting up
Pizza man is in the window, banging on the door
I paid with a credit card, leave it on the porch

Waking up 6AM, TV at a hundred still
Lights on, crack of dawn, fuck man I'm hungry still
Light bulb, great idea, pizza on the front porch
Fuck you it's cold enough, yes I'm gonna eat that shit
Untouched, unscathed, I believe in miracles
Can't think of words that rhyme with miracle
Ate it cold in the box then went straight to bed
At thirty years, honestly, I call that success

Chris Orrick is the patron saint of a poisoned world. The blue-collar MC writes spiteful chants for the permanently scarred, death letters for the forgotten, surly hymns for charcoal lungs. Think Bukowski on an eloquent bender, swapping wine for whiskey, a notepad for a glowing LED screen, the race track for the recording booth. These are anthems for the irate, over-educated and under-valued. ... more

Bandcamp Daily  your guide to the world of Bandcamp

Featuring interviews with the mighty Hiatus Kaiyote and genre-busting L'Rain.